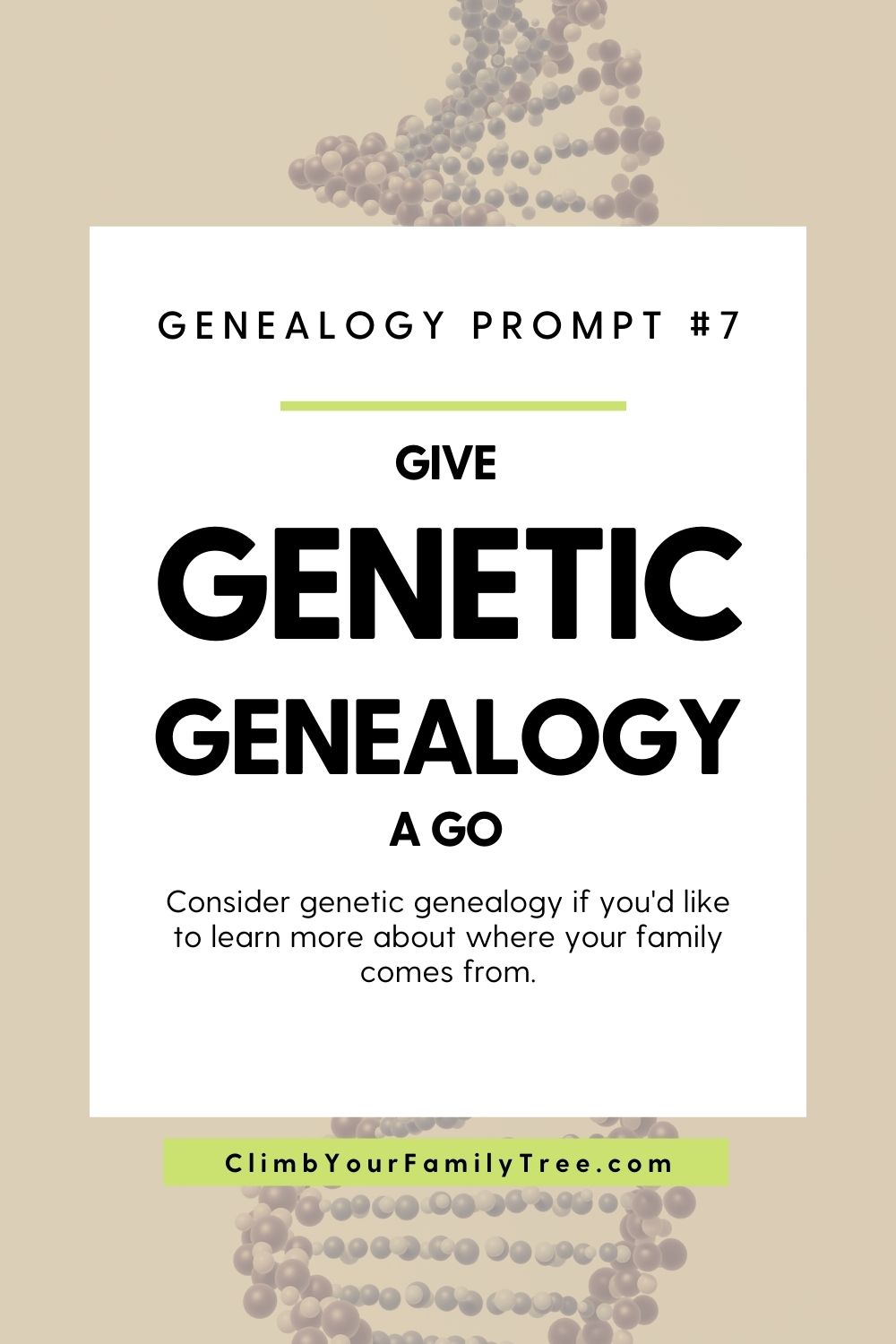 You’ve no doubt seen DNA tests marketed to amateur genealogists and the more generally-curious. Perhaps you’ve taken one. Or even more than one. If so, you’ve used what’s known as genetic genealogy in your research.

In this week’s genealogy prompt we’ll take a look at genetic genealogy, what it can teach you, and some of its limitations.

What is Genetic Genealogy?

Genetic genealogy is the use of DNA testing to assist with genealogical research.

This can involve comparing DNA markers of an individual with those of historical or migrant populations in an effort to determine where someone’s ancestors originated from and how and when their ancestors might have migrated.

What DNA Tests Can Tell You About Your Ancestry

DNA tests can offer generalized information about where your ancestors lived in the past.

This makes them fun for curiosity seekers who aren’t sure where their family history lies.

It’s also a way to verify information you think you know about your family’s story, such as a grandparent telling you your family came from a particular region although you have no documentation to prove it.

While this is what you most likely think of when considering ancestry DNA tests, genetic genealogy can also help trace more recent genetic lineage.

For example, paternity tests are a form of genetic genealogy. And DNA tests can be used for genealogical purposes in helping adopted individuals identify blood relatives.

Perhaps one of the best things genetic genealogy can do is connect you to distant family members who might be able to assist with your research or share stories you weren’t aware of previously.

This is especially true if you use Ancestry.com for both your research and DNA testing as your results can be tied to others’ trees.

As an example of this, I’ve long struggled to break through a brick wall with a German great-grandfather. I’ve found sketchy information about his possible parents and nothing about his grandparents.

However, my DNA results connected me with a single namesake line in the correct area in Germany. I was able to contact the woman researching that line. And even though I haven’t found the connecting link, I now know more about my Eastern European history (the relevant areas are now in Poland and Russia).

I have high hopes this connection and her research could eventually help me past one of the biggest blocks in my own.

While DNA data can show you some interesting things about your past, it’s far from perfect. So it’s important to understand its limitations.

For example, these genealogical DNA companies have far less data about African lineages (and other non-European lineages), making this kind of genetic genealogy less valuable to Black researchers.

On top of this, you have to understand that conclusions drawn from DNA data frequently changes.

That’s because every time someone new takes one of these DNA tests, they add more information to the cumulative data.

As more data becomes available on a population, the story that data tells can change.

That’s why if you’ve used a tool like Ancestry DNA, you might find your family’s geographic breakdown changes from time to time. This reflects changes in the data available and what we know in relation to that data.

When it comes to networking with other people researching your family tree, there are limitations here as well.

For instance, you might come across close family relationships that don’t fit a traditional mold. For example, maybe a half-sibling comes back as a cousin. In these cases where the amount of shared DNA leaves ambiguous results, it’s best to reach out directly.

Genetic genealogy still has a long way to go. But it might be just what you need to satisfy your curiosity in the now.