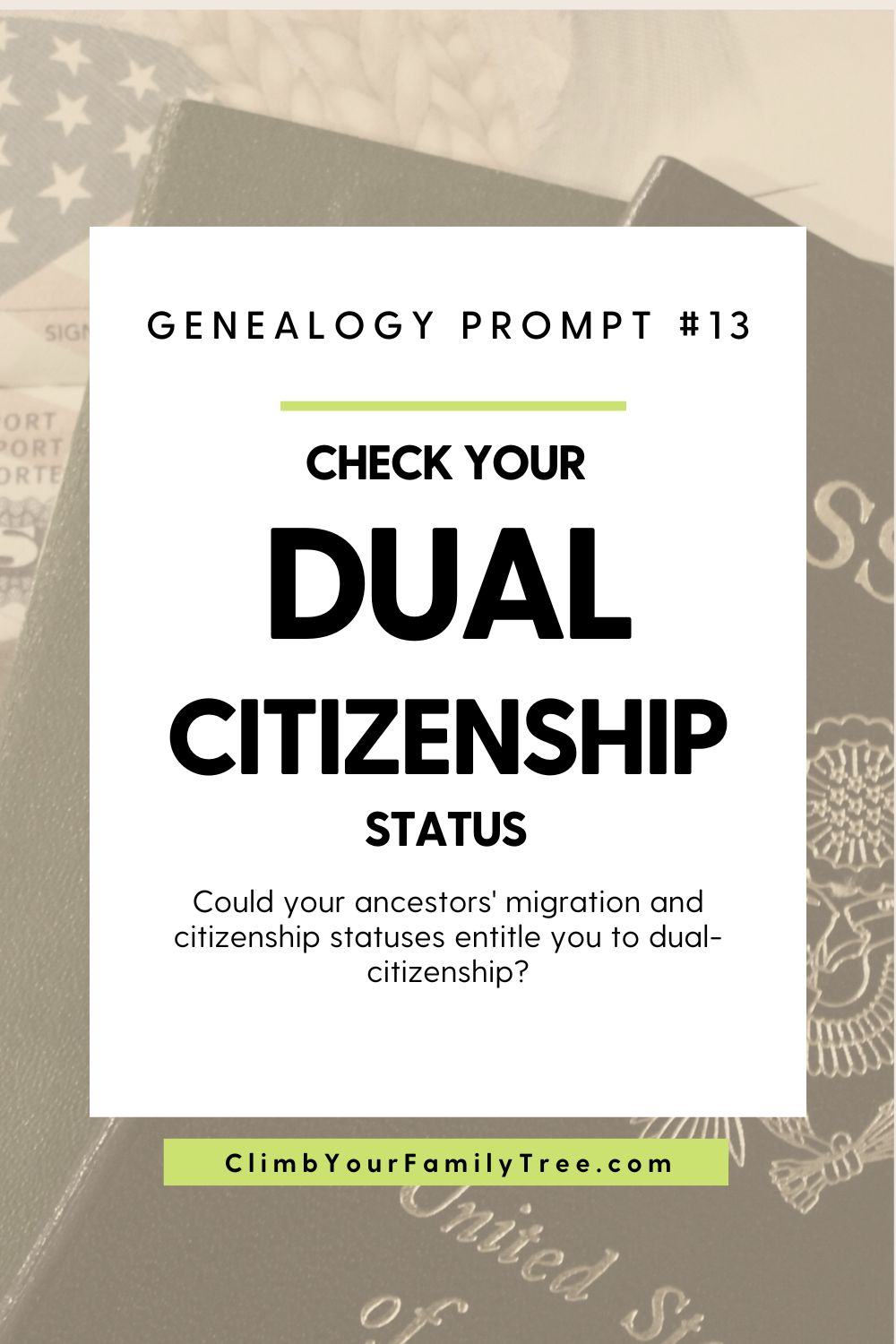 One of the best parts of genealogy research in uncovering mysteries about your family. And sometimes you’ll even uncover new information about yourself. For example, you might learn you’re entitled to dual-citizenship and a second passport.

This happened to me when I was in my late 20s. I knew my grandfather was a German immigrant to the U.S., and I knew he migrated here when he was young. But I had no idea his changing citizenship status happened in a way that entitled my brothers and me to German citizenship.

In my case, my father was born after my grandfather moved to the U.S., but before my grandfather gave up his German citizenship to become a naturalized U.S. citizen. This meant, under German law, my father was entitled to German dual-citizenship (as he was a U.S. citizen from birth). And because he was entitled to German citizenship at the time my brothers and I were born, that right also passed on to us.

As a result, I’m now a dual-citizen with both a U.S. and German passport.

Citizenship via descent doesn’t work the same in every country, and some countries don’t have any policy entitling someone to citizenship simply because their parents were citizens at the time they were born.

But if your parents, grandparents, or even great-grandparents were immigrants to the U.S., it’s worth seeing if dual-citizenship is an option available to you.

Understand these rules can be complicated. And countries change laws around citizenship periodically, so dates are incredibly important to pay attention to. In some countries, and in some date ranges, whether or not your ancestors were married will also impact whether or not you can claim dual-citizenship via ancestry.

You’ll also likely need documentation — birth certificates, old passports, naturalization dates and records of your immigrant ancestors, etc. So expect to do a bit of digging to back up your claims.

I’ll link you to dual-citizenship rules for a number of countries below to get you started on this research. But first, why would you even want to consider applying for a second citizenship and passport?

Benefits of Dual-Citizenship / Having a Second Passport

Here are some of the benefits dual-citizenship might offer you:

For me, it was a mix of having that tie to my grandfather’s history, but also the potential travel and educational benefits not only for me, but also for potential future children.

Some Countries Allowing Dual-Citizenship by Descent

In no way is this an exhaustive list, but here are some countries allowing for citizenship by descent, which might entitle you to dual-citizenship.

I’m only well-versed in rules surrounding my own German citizenship journey. I can’t weigh in on other countries’ citizenship laws. So please, think of these links as a starting point. Talk to experts in these regions’ citizenship if you decide to apply for a second passport.

It can be a long and complicated process, but it can also be a rewarding one.

Again, this is a small sampling of countries that allow for citizenship via descent which might entitle you to dual-citizenship. If anyone from your parents to great-grandparents was a U.S. immigrant, check the nationality laws for the country in question.

Jenn is a professional writer and publisher, and the founder of Climb Your Family Tree.

She first became interested in genealogy as a teenager. Since that early start, she's spent more than 25 years putting her personal passion and professional research skills to use in exploring her own family history while assisting others in their genealogical journeys.